Running and Pollution in Beijing 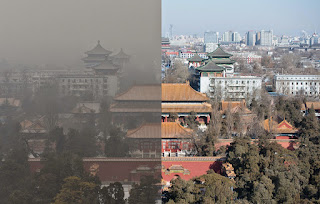 My phone beeps and I look down and I see I have a received a text from a running coach Tian Hai Yuan although he usually goes by the name “Bill” when talking to non-Chinese people.

“The message reads: “This Sunday – marathon in Zhengzhou, speed train 4 hours from Beijing . You want to run?”

I receive these types of messages at least once a month, to run marathons across China in exotic – and not so exotic places – all expenses paid.

No I am not an elite athlete – I am just your common or garden journalist who likes to do a bit of running in his spare time. But I do have one special quality when it comes to marathons in China - I have a foreign passport.

There is a revolution taking place in China. The country is undergoing massive developments, faster and deeper than any other country has in history. Almost every aspect of China has seen radical change over the past 40 years from massive reductions in poverty to the largest middle class in the world.

In the past five years, running in China has exploded – largely catering to this booming middleclass.

It is hard to get official numbers, but it is estimated that China hosted more than 1,500 marathons in 2018, 100 times the number of just five years ago – and that number keeps growing.

China also has 102 cities with populations of more than a million, most of which you have probably never heard of, but they all have ambitions to be famous and stand out from the crowd. Many of these large unknown cities think a massive city marathon may be the secret to achieving fame and global recognition.

And that is where my foreign passport is worth its weight in gold.

You see race organizers are desperate to attract as many different nationalities as possible to take part in their events to make them appear as international as possible.

Bill, who sent me the text, is a middle man between the foreign runners and the race organisers. I met him while running around the world famous Temple of Heaven in Beijing one Sunday morning a few years ago. He is constantly scouting for foreign runners who he can take from race to race and receive a small fee from the grateful marathons.

In many ways these are the best of times to be a runner in China.

However there is one massive drawback: pollution.

The very same factors that have led to the largest middleclass in history have also caused one of the worst pollution problems in the world.

And I experience the issue on an almost daily basis as a runner.

Before I go for my morning run I have to check an app on my phone which gives me the current pollution level. An AQI, or Air Quality Index of 0-50 is officially OK according to the US embassy, 50 to 100 is “Acceptable”, 100 to 150 “should limit prolonged outdoor exertion” and anything over 150 “everyone may begin to experience health effects”. I take a rather cavalier approach and run if the levels are under 200, most fellow runners I know draw the line at 150.

In 2014 pollution levels at the Beijing marathon peaked at over 400 micrograms per cubic meter according to the US embassy. And pictures of runners in thick smog were broadcast across the world in what many considered to be a public relations disaster for China.

However the year before that infamous marathon the Chinese government started to implemented some drastic anti-pollution measures such as fining the worst polluting factories, imposing output controls on steel and aluminum smelters and setting nationwide caps on coal use, in Beijing for example the goal was to reduce coal consumption by 50% between 2013 and 2018.

According to an independent study by the University of Leeds published in October 2018 the policies seem to be working. Between 2015 and 2017 there was a 20% drop in particulate pollution.

Of course as a runner I didn’t need to see all the report to know things are getting better. I literally feel it every time I run a 10k

So has China solved its pollution problem?

Just as one swallow does not make a summer many environmentalists are warning that one good year of lower pollution figures does not mean the issue has been solved. Last year in particular China was fortunate enough to have a set of weather conditions which helped lower the pollution levels. Cold fronts from Siberia brought cleaner air which not only dispersed the pollution but served to disrupt the high pressure that helps trap polluted air close to the ground.

And now in the words of everyone’s favorite fantasy drama TV series “winter is coming”. Or to be more precise November the 15th.

The majority of central heating is controlled by the government – even domestic heating – and in Beijing it is turned on, on the 15th November and lasts until the 15th March. If there is going to be a bad pollution these are always the worst months.

Or another way to measure it – how many races will I be able to run this year?
Posted by Marcus Ryder at 21:51